Solving the 3n+1 Problem with YottaDB

Our goal of “YottaDB Everywhere” aims to provide rock solid, lightning fast, secure persistence wherever it is needed. This means providing standard, supported, YottaDB APIs (called “wrappers“) to access YottaDB from popular languages. This in turn leads to several needs:

Our solution to this is to create programs to solve the “3n+1” problem.

The functional goal of the 3n+1 problem is as follows: 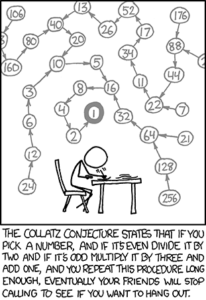 By providing solutions to the same problem in multiple languages, our goal is to provide working sample code as a template for developing applications, as a learning tool and as a mechanism to compare the relative performance of various implementations.

Starting with any positive integer n, a sequence of numbers (the 3n+1 sequence) can be generated as follows:

Lothar Collatz conjectured that for any finite n, there is a finite length 3n+1 sequence that ends in 1.

Our practical goal is to illustrate the use of YottaDB’s key value store to solve this problem.

As the core functions of a database are sharing and persistence:

Until it reaches the end of the input, the program reads lines, each of which has:

For each input line, the program produces a line of output:

To illustrate the use of YottaDB in-process data management (it is more than a database), even when a language implementation has packages and data structures such as hash tables, programs use YottaDB local variables.

A manager organizes the work, launches workers, and reports results when all workers are done. In order to minimize artifacts from launching workers (an activity in which YottaDB plays no part), each worker waits till the manager indicates that all workers are launched, before starting its work. The manager then waits for all workers to complete before it can report results. Where the manager and workers are processes, this coordination is accomplished with YottaDB’s hierarchical locks. Since YottaDB locks are resources owned by the process, in implementations where the manager and workers are threads or co-routines, coordination is achieved using non-YottaDB mechanisms.

Although quick and easy, the 3n+1 technique has limitations, especially when it comes to using it for benchmarking and performance tuning:

In the future, we anticipate blogging about actual results from our 3n+1 programs which we will make available so that you can run them. Meanwhile, please do send us your comments.

Images Used:
[1] A graph, generated in bottom-up fashion, of the orbits of all numbers under the Collatz map with an orbit length of 20 or less
[2] A graph with the value of the number of steps to reach 1 applying Collatz procedure to numbers between 2 and 200.
[3] Collatz Conjecture, XKCD
[4] The Collatz map can be viewed as the restriction to the integers of the smooth real and complex map. Iterating the optimized map in the complex plane produces the Collatz fractal.